By Rosa F Yancey
with other items from other sources.
see also:   The Dilemma Faced by the Virginia Yeoman

In 1609, John Rolfe arrived at Jamestown, Virginia, and is credited as the first settler in North America
to have successfully raised tobacco (commonly referred to at that time as "brown gold")  for commercial use.

Who would have known at the time - the great impact
that this little plant would have on the destiny  of America in later decades
and how a few centuries later a Civil War would be fought
for reasons that included the slave labor that was used
to plant and harvest the "Devils Weed". 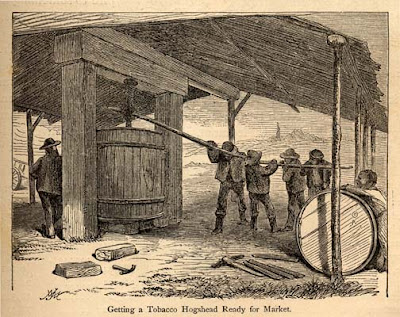 A receipt for one Hogshead of Tobacco
sold by Stephen Nance

Hogsheads of Tobacco being transported to market

A tobacco hogshead was a wooden barrel into which farmers packed cured tobacco leaves and was used in American colonial times to transport and store tobacco. Since the average hogshead weighed over one thousand pounds, animal power was used to transport the hogheads over the rural roads to warehouses.  Because of the challenges involved, warehouse operators sought river and port locations so farmers could float hogsheads on flat boats. Similarly, buyers could use boats to send out hogsheads they had purchased.  A very large wooden barrel, the standardized hogshead measured 48 inches (1,219 mm) long and 30 inches (762 mm) in diameter at the head. Fully packed with tobacco, it weighed about 1,000 pounds (500 kg). 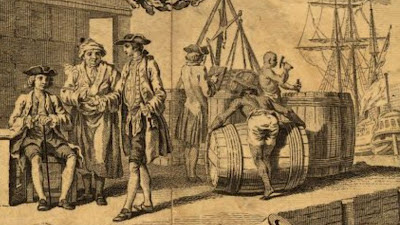 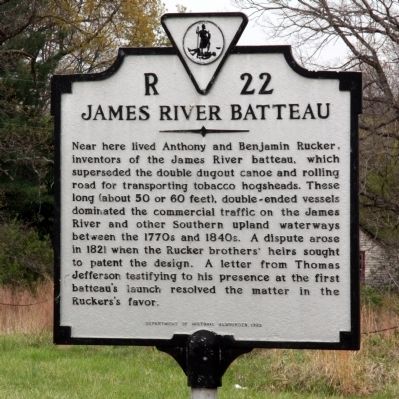 A Batteau - used to transport hogsheads of tobacco down river to the main ports.