Rose Marie Reid (born Rose Marie Yancey (September 12, 1906 - December 19, 1978) was an American swimsuit designer.  Reid began her swimsuit designing career in Vancouver, British Columbia, Canada.. She designed bathing suits that looked good and started a new trend. Lacing up both sides was typical of her earliest swimsuits and a 1938 example is preserved at the New Westminster Museum and Archives in Canada  By 1946 50% of the swimsuits sold in Canada were designed by her. Reid filed for a U.S. Patent in 1950 while living in Los Angeles, California, for a one-piece bathing suit using elastic fabric and lacked buttons. In 1955, Reid was named Designer of the Year by Sports Illustrated and Woman of the Year by the Los Angeles Times.  A member of The Church of Jesus Christ of Latter-day Saints, Rose Marie was known in Mormon circles for her proselytizing efforts among the Jewish people, some done in the 1950s in cooperation with LeGrand Richards.She was married to Jack Crossman Reid.

Information about her family

Rose Marie Reid was likely the most popular swimwear label of the 1950s, and her bathing attire remains just as attractive to the vintage clothing world today. The lady behind the label lived a remarkable life, outfitting the likes of Joan Crawford and Marilyn Monroe in her heyday.

She was born Rose Marie Yancey in 1906 to a Mormon family in Utah. Her upbringing lent itself to entreprenuerial success, as she worked in the family's grocery enterprise by age 14, and her mother taught her sewing at an expert level.

After marrying Jack Reid and moving to Canada, her bathing suits were borne out of a request by her husband for a pair of swim trunks in the early 1930s. His complaint was that swimsuits of the day were all-wool, and when soaked in water became very heavy and uncomfortable. She created a pair of trunks cut from an old duck-fabric coat, and laced the sides for a close fit. They were so functional that Jack arranged for a local department store to carry the swimwear, much to Rose Marie's reluctance. He'd even claimed they had similar (non-existent) women's suits available! With this, Reid Holiday Togs, Inc was created.

In their first year, the Reids showed six styles. In later years over 100 designs were shown in one season, as annual sales soared from $32,000 in 1938 to $834,000 in 1946. The war years stifled Rose Marie's creativity with quotas and fabric restrictions, but she continued to innovate.

Rose Marie began more direct competition with US swimsuit companies in 1946. With financial backing, Rose Marie's business overtook the industry in a few years, and quickly found her competitors copying her designs. Cole even had a suit they audaciously named "Rose Marie" because they'd stolen the design from her (Burr & Petersen, p. 89). By 1958, sales were $14 million as Rose Marie ruled a swimsuit empire.

Rose Marie was the first swimwear designer to come out with more than one line a year, including a late summer line and a resort & cruisewear line. Notable bathing suits included one "of glistening white" with a lobster placed on it, presumably after the surrealist Schiaparelli gown with the same theme (Burr & Petersen, p. 44). There was also a gold metallic suit with a price tag of $90, when most swimwear sold for $6.95 at the time. When Rita Hayworth bought one, Rose Marie enjoyed instant success despite the price. Another gold suit created in 1951 was actually precious metal, in black lace with 24-carat goldplating. This rarity sold for over $100 exclusively at Lord & Taylor.

Rose Marie found herself traveling to Europe for inspiration, and dining with the likes of designer Emilio Pucci and journalist Ann Scott James. Pucci complimented her by taking her swimsuits to his office staff. Even amidst the glamour, her personal style was endearing. At one RMR show, she'd had such a time crunch that the suits weren't priced beforehand. Rose Marie solved the problem by simply asking the models what they'd pay for the suits they wore! Then in 1955, a rose was created in her name, inspired by the colors in that year's swimsuit line. And in '58, she won the American Sportswear and Design Award. By 1959, her factories produced 10,000 suits per day. Rose Marie was on top of the world.

Just a few years later, RMR's swimwear success faltered with the bikini craze of the 1960s, and was accelerated by Rose Marie's emerging health troubles. Other designers were brought in to contribute designs, changing the atmosphere of the company for the worse. For the first time, some suits that had her label were not her designs.

Decorum was on Rose Marie's mind when the bikini binge began. Suddenly the midriff-baring two-piece suits were everywhere. At Saks, women over sixty were buying bikinis, and women sized 20 were requesting them. This change of taste was one Rose Marie tried to overcome by crusading for the modesty of the one-piece suits she made famous. She disavowed ever designing a bikini, but due to the collaborative design effort now present at RMR, bikinis were nonetheless made with the RMR label. She left the company she'd created in 1962, claiming the bikini was ultimately its demise. Rose Marie was not idle, however; she began marketing wigs in 1963.

Why was RMR so popular? Rose Marie sparked the very idea of beauty in swimwear, compared to earlier wool suits meant for sport, not style. Yet finding a flattering swimsuit was just as difficult then as today. As the swimsuit queen said herself, "Nothing is so brutally frank as the bare essentials of a bathing suit" (Burr & Petersen, p. 45).

To achieve the goal of flattery on every figure, Rose Marie always designed on the model to ensure a realistic shape even through the severe silhouette of the 1950s. She referred to her customers' various silhouettes as "jewel shapes" - six geometric shapes that were all stunning in their differences. A few of the innovations Rose Marie developed in her suits included:


She found that pastels and dark colors seemed best for hiding figure flaws, and that she could manipulate fabrics' grains for rigidity or elasticity, depending on placement (like the bias cuts Vionnet used for dresses decades before). She made certain to include adjustable fittings & closures for a more tailored effect. Details previously used only in lingerie & evening wear, like boned bodices and wired bra cups, were added to achieve a smooth silhouette.

Rose Marie's intuitive genius created swimsuits that wore well, looked flattering and seemed so much more special than the utilitarian looks they originally replaced. From the 1950s to early 60s she ruled the swimsuit market, and she is well-remembered for her ambition and creativity. 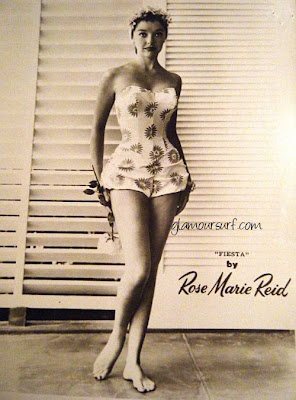 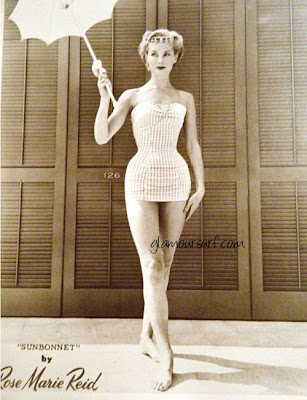