any questions or comments about this page can be directed to djyancey1965@gmail.com

Liberia, officially the Republic of Liberia, is a country on the west coast of Africa, bordered by Sierra Leone, Guinea, and Côte d'Ivoire. Liberia, which means "Land of the Free," was founded as an independent nation by the American Colonization Society, with support of the American government, for free-born and formerly enslaved African Americans. Recently it has witnessed two civil wars, the First Liberian Civil War (1989–1996), and the Second Liberian Civil War (1999–2003), that have displaced hundreds of thousands and destroyed its economy.

Information concerning one Charles Yancey
emancipated slave of Joseph Abney, participant in the Mexican War, and emigrant to Liberia, Africa

Isaiah and Elvira Yancey (husband and wife?)
emigrating from Richmond, Virginia to Liberia in 1854.
Source:  The African Repository, 1854, page 381

From: The African repository -  By American Colonization Society

Yancys emigrating to Liberia in 1868 from Sparta, Georgia - Isaac and Allen Yancy were brothers.

Yancys emigrating to Liberia in 1872. (note mention of Allen Yancey and party coming from Sparta, Georgia - - also note an Isaac Yancey (his brother) was already in Liberia at the time.

Note that William Yancey (the husband of Cornelia) is not listed and had died before this date.
Also note Denis Ware was a son of Cornelia (& William?) Yancy.

<1875?>
“The first assault made by Government forces against the Mayanowo Tribe after the waging of hostilities was operated against a town called “Wuduko”.  The Government Forces succeeded in capturing and burning this ??? but then the combined forces of the Myanowo  Tribe came down from Big Town against them and this contingent of government forces which numbered only twenty five, was compelled to retreat.   There were three brothers who were among the contingent:   William Shadrack, Alexander and John Hillary Tubman. William Tubman was killed on the spot and left on the field. John Hilary Tubman was shot in the arm. There were three other casualties but not fatal.  . . .  In the meantime the enemy attacked Tubman Town and Philadelphia  . . . . One of them named Billy Williams got up from the table and went out to attend Natures Call and he heard the sentry whispering “there they come”.  When he looked up and observed they were surrounded by about ten thousand of the enemy, the colonists numbering about thirty six, he yelled out “By God, stir up boys, here they come”. And they came out , men and women, and a fierce battle raged until night.  The enemy retreated but was back the next morning.  It was decided that the  settlement of Philadelphia  could not hold out any longer, but they fought all day until night when the enemy again retreated.  In that battle one of the leaders of the Government Forces Captain Isaac Yancey was killed and several others wounded.

. . . the settlers of Tubmantown however were never defeated.  They held out.

Information on the Parker Yancey family can be found in: "Journey of Hope" - by Kenneth C. Barbnes, pages 23-24
" . . .By spring 1879 McKeever, and the Lucas, Johnson and Yancey families of Poplar Grove [Phillips Co., Arkansas] were finalizing their plans to emigrate . . . By the end of May, all five Arkansas families were on their way to New York . . .The McKeever, Johnson & Lucas families traveled by steamship from Helena to Cincinnati, where they met Parker and Jane Yancey and their three children who had left earlier by train.  From Cincinnati the whole group traveled by rail to New York arriving on 9 June. They went directly aboard the bark Monrovia to their steerage accommodations, as they had no other place to stay. The families all eventually settled in Brewerville, a farm community on the St Paul River about ten miles from Monrovia.

Cape Palmas, Liberia - Record of a ship-wreck of the Liberia Coaster in 1881.
Note that James Yancy (sailor) is thought to have lost his life but Murdock Yancy (mate) was able to save his.

In 1891 - Sandy Yancey and William Yancey and their wives involved in Methodist Church activities.
Source: "The Gospel in All Lands" Eugene Smith, 1891 page 281-282.

CLICK HERE for an interesting account from the "Memorials Gilbert Haven, Bishop of the Methodist Episcopal Church" (1880) - mentioning  what was probably either Allen or William Yancy [about 1875?] - note it mentions that a brother had in recent years been killed.  Note it also implies that Brother Yancey adopted the children of his deceased brother.  Who is the deceased brother?  Isaac Yancey?

Mention of Allen Yancys brother [Isaac??] being killed in the Cape Palmas War

The wife of Sandy Yancy is understood to be Elizabeth Barnes
she being born in 1871 in Atlanta, Georgia.  After Sandy's death she is to have remarried Alexander Tubman
the Father of President William Tubman - President of Liberia.
see:
http://chronicle.augusta.com/stories/092301/tub_095-8000.shtml
http://chronicle.augusta.com/stories/090901/tub_095-8006.shtml

"The Gospel in all lands" -  By Methodist Episcopal Church. Missionary Society - 1899

"[Vice President Allen] Yancy was born in Cape Palmas in 1881, the son of Reverend Allen Yancy, a minister of the A. M. E. church who with his wife migrated to Maryland County [Liberia] from Hancock County, Georgia in 1873 [actually 1872].  His father had been first a farmer and then a blacksmith, and had taught these trades to his son.  After Yancy senior died, the son added wheelwrighting to the business for nearly all the trading firms at the time in Cape Palmas.  Having learned to speak the Grebo language well, he was able in 1902 to woo and marry a native woman of the powerful Nabo (Bigtown) clan of the Grebos.  Gertrude Seton. They had eight children, six boys and two girls.
Source: Bitter Cannan - the Story of the Negro Republic By Charles Johnson. page 164.

YANCY, ALLEN NATHANIEL . (1881-1941). Vice president (1928-1930). Born in Harper, Maryland County, the son of a Georgia preacher.  In 1905, he was appointed justice of the peace. Although a captain in the Liberian Guard, he remained neutral during the 1910 settler-Grebo conflict --his marriage to Gertrude Cora Wede Seton, a Glebo woman, in 1902 may have been a factor. After the war he became a store manager for the English trading firm of Woodin and Company. In 1918, through the assistance of the future president, Edwin Barclay, Yancy was appointed county attorney for Maryland, In 1920, President C.D.B. King appointed him county superintendent, a position which he held until 1927, when he was elected to the position of vice president of the republic.  . . . Both Yancy, and President King were forced by the electorate to resign their positions. He died on February 21, 1941 and was initially buried in Lagos, Nigeria. In 1944, his remains were returned to Liberia, and he was reburied at Harper on December 5th 1944.
Source: The Historical Dictionary of Liberia Ernest Jerome Yancy (above and below)  - Secretary of Education - (under President Tubman?)
Above (with wife Mary Louise) visiting Bethune Cookman College in Florida, USA
Author of "Historical Lights of Liberia's Yesterday and Today" published in 1934
Son of Vice President Allen Yancy.

Ernest J Yancy in Israel where he served as Liberian Abassador

"During a break in the meeting, Evans Yancy, Sandy's brother, says that when he was growing up in Liberia, people heard his name and told him his family was originally from Georgia.  "So when I came to the states, I came to Georgia", he says.  He visited the state archives and found several Yancys in old phone books near Augusta, Georgia. "I found Isaac Yancy", he says. "Isaac Yancy was a common name in my family.  I didnt know if it was black or white, but I figured either way "he drove to the town where Isaac Yancy was listed as minister, but found that he had recently died.  And he inquired around town, he was shocked when one man recognized his relation to the Yancys.  "He said 'I knew you were related to Reverend Yancy - - you have his eyes.'  Eventually Yancy organized a reunion of the two families - the Sinoe expatriate Yancys and the native Georgian Yancys.  He says he met a man there who looked more like his brother Sandy then he did, after 165 years of family seperation. Yancy says most of the expatriates do not expect to go back to Liberia to live.
Source: Mississippi in Africa, by Alan Huffman 2004. page 130-141 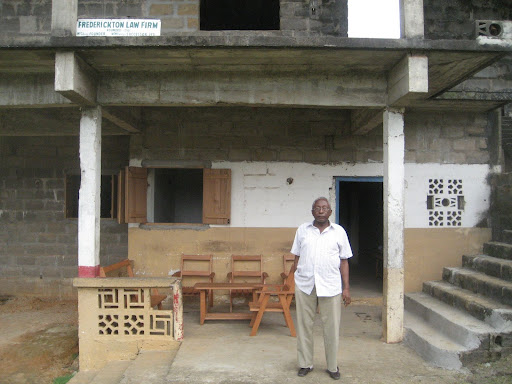 The Yancys of Liberia are closely connected to the famous TUBMAN Family of Liberia.

The Tubmans of Augusta Georgia went to Liberia in 1837 - as freed slaves frorm the Tubman Estate.

The slaves of Richard & Emily Tubman

A description of early TubmanTown

Who are the Tubmans?

William V. S. Tubman was the 19th president of Liberia - serving from
Above is a family photo of when his Father Alexander Tubman died somewhere between  1917-1920. 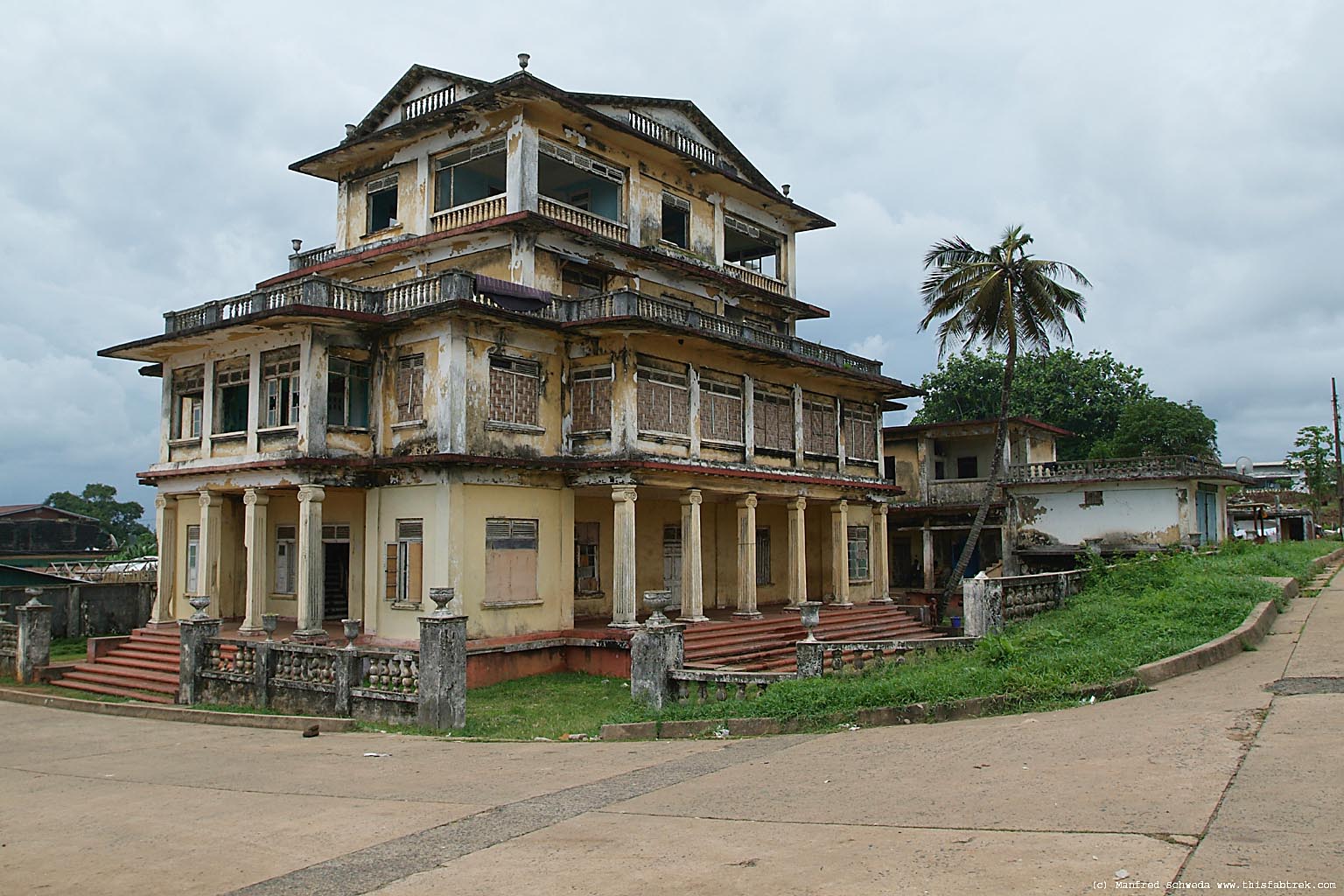