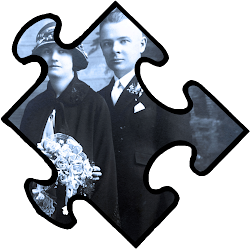 The Jigsaw Puzzle That Is Your Family Tree

Documenting the members of your extended family tree - or all the descendants/ancestors  of a given person in your family tree - is almost like putting together a large jigsaw puzzle.   It is a puzzle that you cannot complete in one sitting - but may take days, weeks, or even years and even then the puzzle will never totally be complete.  It will quickly become obvious this is different than the simple jigsaw puzzles you are used to . . . you soon discover that it is a puzzle of many complex dimensions including both geographic location, time and generation combined with many changing patterns and colors. The border pieces of the puzzle may not be obvious as you begin. And contrary to the traditional jigsaw puzzle in the box - you will not have the box cover image to know what the puzzle should look like when it is completed - there will be surprises along the way. You will also notice that as time goes by - the methods and approaches you use to make the quickest progress on the puzzle will change with time, experience, and acquired knowledge of the puzzle itself.  If you are a novice to jigsaw puzzles - you may stumble through different techniques until you find one that you thinks works the best for you - with your limited experience.  And as time goes by you realize that your methods and your options as to your puzzle completing abilities change - not only because you have settled on a methodology that seems to work better than others - but also because you are becoming familiar over time with the puzzle, its regions, patterns, colors and how the pieces seem to fit together.

As an example at first you may simply take one piece - and start trying other pieces one by one to see if the two can be joined together based on their interlocking shape. But you may quickly realize that though such a system might work - it is very ineffecient. You may try to group pieces with common patters, colors, brightness and other attributes. You may also find that certain approaches that worked very well at the beginning - such as focusing on border pieces - didnt work well at all toward the end of the puzzle.   As the puzzle nears completion you may often be able to use a "process of elimination" approach to know where a certain piece goes - an approach that would have been impossible at the beginning.

There are so many thousands of pieces to the puzzle - that at first it seems so greatly overwhelming - and you may get discouraged - but with time - - - maybe months or even years - you begin to wrap your mind around it all - catching the vision of the different regions of the puzzle and how they all go together to build the beautiful image hidden in its individual pieces.

As the puzzle progresses there will certainly be times when you may need to  undo certain work and / or  shift pieces around that were first thought to go in one region but later ended up actually belonging somewhere else. As the puzzle solver make progress they realize that not all regions of the puzzle are of the same quality.  Some areas have pieces that are rather mangled or broken with parts of the images peeled off or hidden.   You may have to use some tape and glue to fit some of these pieces together - and you may not be 100% sure your getting it right.  As you get nearer to completion you see certain areas that still have gaping holes - where pieces are hard to fit together - and you realize that most of the free pieces left probably belong to those regions - but it takes time and analysis and you realize that now that you do have these small gaping holes you have a much better idea of where the rest of the puzzle pieces go then you did at the beginning.

My work on the Yancey Family tree (and surely the work of others doing similar work)  compares quite appropriately to this interesting metaphor.  It is a real world  puzzle that paradoxically only generates more question and more missing pieces as more pieces of the puzzle are put together.   At the beginning  I collected information I found - not really too sure some times - whether the information was reliable or corresponded or contrasted with other record of the family.  In the beginning maybe all I had was nothing more than a common location or similar name spelling to link people together - but with time and more research and after compiling a database of information I had a much better handle of the common attributes of the family and its different branches - things like culture, language, ethnicity, religion, typical occupations, affluence and many other attributes helped me in making a better judgement call as to whether a certain connection was probable or improbable.

As my  "database" of family members became more and more comprehensive and complete - I found coming to certain conclusions about who a certain bit of information can be attributed to became easier   - and with time I could sometimes use a "process of elimination" approach - that was virtually impossible at the beginning of my investigation.   Such was the case with things like things like  military records - which often lacked details that would (by themselves) allow me to identify the person with total accuracy - when maybe I only had a place of military enlistment and maybe an approximate age if  I was lucky.  It was only after years of building a rather comprehensive Yancey database of Yanceys in America - that I could even come close to a probable identity of many of the military records as well as others of a similar nature. It took extensive time for me to build up a reasonly comprehensive database - using as sources comprehensive census lists, military lists, death records etc.    Only when I had a relatively comprehensive database and could then take such information and go through a "process of elimination" approach was I able to identify most of the names listed on Yancey military records.

Another thing that I faced early on in my research was never really knowing when I reached a certain "brick wall" in a certain part of the family tree - was whether this was simply because I needed to collect more information about the family tree from additional source records, or whether the lack of records itself was telling me something. If I found a group of Yanceys that descended from "John Doe Yancey" and I had no record of who John's parents were. At the beginning I just assumed it was because I needed to do further research and / or search for differing source records that would have the answers.  And in so many cases this was true.  But as I was able to build a more comprehensive database - and over a very long period of time (years) of researching and data collection - as I fitted more and more of the pieces together - it seemed that for many of the stubborn "brick walls" that persisted - It was NOT simply because I needed to do more research, or not simply because certain records had been lost - that the links were not obvious. Rather the lack of information on a certain branch of the family - began to be clues telling me that there might be certain events or characteristics about a certain family that was the reason itself for the lack of information on the family tree connections. I began to see that events like the running away from home of a child, or the birth of a child out of wedlock, the early death of a parent, or a dysfunctional family, extreme poverty - and various similar scenarios often were at the root of these stubborn "brick wall" connections that persisted  - even after years of research and even after compiling quite a comprehensive Yancey database.

I noted that there were some areas in the family jigsaw puzzle where I had been able to group a portion of pieces together - but had a hard time in taking this group of pieces and joining it with the rest of the puzzle.  In many cases there seemed to be a set of reasons for this apparent disjoint characteristic - sometimes the reasons were obvious (such as a child who became orphaned at a very early age and never knew much about their parents ancestry)

At the beginning of my research I simply collected Yancey information from wherever I could find it - simply focusing on the name itself wherever I found it.  After many years of research I came to be much more familiar with the characteristics and attributes of the family as a whole. Things like, their geographic placement and migration patterns, their religion, their language, their naming conventions, their  most common occupations and trades were all things I came to become familiar with.   I was able to discover that most Yanceys in America trace back to early colonial Virginia and had a common ancestry and many common attributes.  However there was one significant family I discovered that also used the name "Yancey" - that had some very different family characteristics.  After coming from the Old World they had settled in the New York and Canada, from France with the corresponding cultural traits - this versus the Yanceys of Virginia which had charcterstics of the English and Welsh.  This smaller branch of Yanceys from the North - were Anabaptists, . . . which contrasted greatly from the early Yanceys who were loyal to the Church of England.  Becuae I focused on the characteristics of these families instead of just the spelling of their name - I was able to quickly note that these two families do NOT seem to have any family connection - even though they do share the same spelling of their name - sort of reminds me of when I learned of "covergent evolution" in biology class - where two animals that really share no close common ancestry evolved into an animal of very similar look (like a dolphin and a fish).

Another similar case for which I was only able to develop some theories about in recent years after decades of research - is the family of one William yancey of West Virginia.  Over the years I made contact with various descendants of this William Yancey - but few that had any real concrete information about where he came from and how he connected in the with the other branches of the family.