Neither Carpetbaggers Nor Scalawags: Black Officeholders During the ...
By Richard Bailey

The Union League Movement in the Deep South: Politics and Agricultural ...
By Michael W. Fitzgerald page 168 Historian Richard Bailey discusses the new historic marker that was unveiled Tuesday at Court Square Fountain. One side of the marker commemorates the first emancipation observance in the city, and the other side deals with slave trade in the Capital City.

A historic marker unveiled in the town square on Dexter Tuesday took a crowd of Montgomerians back to more than a century ago.

The planting of the new marker at Court Square Fountain nurtures two stories: One side designates the location of the city's slave market. Its flipside denotes the 1866 parade to mark the first time Alabamians had the opportunity to observe the signing of the Emancipation Proclamation.

"Montgomery is arguably the most historic city in America," said Councilman Tracy Larkin. While commemorating the past, it can sometimes be "painful and embarrassing," but there is value in studying all history."

The life-changing events of decades gone by merely form a triangle near Court Square, ceremony participants learned. Slaves shipped from the Alabama River were traded along with mules and other livestock, historians noted. In this area lies a marker summarizing the story about the telegram to fire on Fort Sumter, sparking the Civil War. And this spot also marks where Rosa Parks boarded the bus in December 1955 and gave birth to the Montgomery bus boycott.

Organizers say this marker highlights one of the most momentous occasions in history and future research on families. In 1863, President Abraham Lincoln declared in the Emancipation Proclamation all persons held as slaves were free. When news arrived to the Capital City, a parade through town followed.

Thompson also told the mass of people to acquire land, homes and education for their children, the marker read.

"The slave marker is important because genealogists usually take pride in knowing where slaves were sold so that they Oh trace their lineage@ more effectively," said historian, Rich Bailey. "Montgomery was a major slave market in the antebellum South."

For 16,year-old Raymond Barnes, his understanding of slavery is more of a textbook issue and stories passed down through generations.

"It is good not to have somebody ruling over you. We're free and can do whatever we want," said Raymond as he entered St. Jude Catholic Church for an Emancipation Proclamation celebration. "I'm happy we don't have to go through that stuff."

Robert James, a past president of the Emancipation Association of Montgomery, said the past can't be overlooked.

"Those of us who had relatives who came through those times can only think about what they went through," James said, "and thank God it won't happen again." 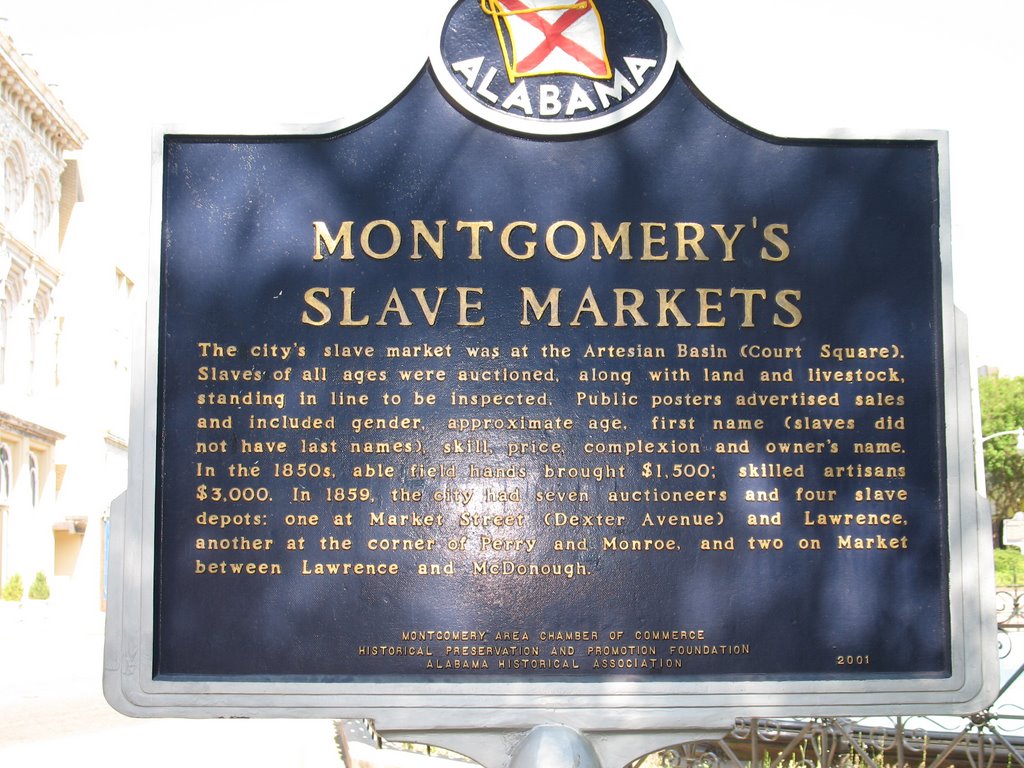