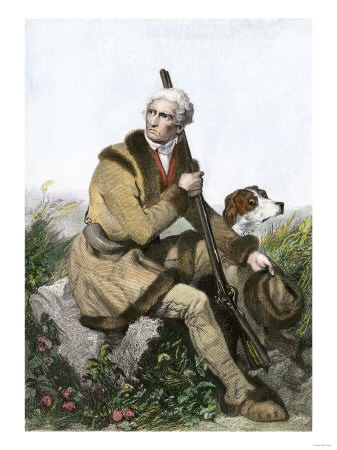 Daniel Boone had fought the Indians and won. He was fighting white men now and losing steadily. Year after year, a series of legal troubles plagued him. Indians with knives, rifles, war clubs, and tomahawks held no terror for Daniel Boone. Lawyers with calf-bound books, writs, summonses, and suits conquered him easily enough.

He had opened the land, cleared it, defended it. His daughter had been kidnapped. Two sons and a brother had been killed. Risking his own life had been such a commonplace for years that it was hardly worth mentioning.

Daniel Boone had the odd idea that he might own some of that land, particularly as he had received certificates from the state's officials, specially appointed to give clear and valid title. However, he was wrong again. The lawyers explained that to the judge easily enough, though it was never quite clear to Daniel.

. . . Boone acquired additional enormous land holdings in Kentucky by surveying lands on shares for wealthy gentleman in the East. In all such cases Boone guaranteed to secure good lands with clear titles. When he failed to do so he not only lost his own share but found himself in debt to the men whom he had given the guarantee. . . . With all these elements combined against him, he soon found himself hopelessly loaded down with debt.

It was not long before the Kentuckians, who had once all but worshipped him, hated him savagely. His honesty as a surveyor was questioned.

Cited from "Laurus Crawfurdiana" [The Crawford Book] By Frank A. Crawford Vanderbilt 1881.

I received yours dated the 20th of February 1785 and am very sorry to hear you never received a letter from me as I have wrote you three since I saw you at Brother Grants and sorry to here of the death of your brother ad I make no doubt it puts you to many disadvantages. However, we must submit to providence and provide for the living - and talk of our lands - your plots were all returned that we surveyed immediately but Bridges and Boone's pre-emption and that of Boone's for a most simple reason in making out his plot and called for my beginning the entry said, running North, then East, South and West to the beginning I run East North West and South to the beginning - So I had another plot to make out and having no other business at the Registers Office I let Bridges lay till about 7 months ago however I expect them at Richmond - by this time there are no dispute reasons on any of your lands at all the land you got from Col. Jodd is not yet laid of for good reasons - Mr. Parker, his partner was gone to Philadelphia and returned but a few days ago and their patent is come - I went the other day to Jodds on that account and he is free to do what he promised you but Parker could not be got at that time. I also wanted Capt. Hayes with me at the laying of the land as he is better at the business then myself the uninst fees you desired me to recall from the general surveyors I expect is useless until Col. Marshall returns from Virginia at which time I shall demand it as for Mr. Thomson in Lincoln County he utterly denies taking the double fee and told me at that time they had no right to them.

Inclosed you have a few lines from Col. Marshall. I shewed him the order your Sun Bobey gave me but he sayes he thinks he owes you nothing and if he dos his son John will satel with you. Sir donot be oneasey about the balance due me until a convenient opertunity sarves. We are all well at present. My respets to our family. I am Sir, your omble Sarvent - Daniel Boone

. . . I have often defended you in public against calumny and abuse . . . The thousand acres warrant that I first put in your hands cost me dear when the money was good, which you promised me should be laid on good land. But I have neither warrant nor land as yet.

A number of the locations you charged me for are not surveyed or returned and may possibly be lost to us forever, and I am told Hughes survey of two thousand acres will the most of it be lost, owing, as I am informed, to its not being surveyed according to location. Boone's settlement and pre-emption, I am told, has claims on it, and I fear, may be lost, at least in part, as I fear it was not located in time, and Bridges' pre-emption and settlement, I am informed by Wm. Lipscomb, that he can find no deeds to him either in Fayette or Lincoln Counties, and that many settlers are on all those lands, and that it may finally be lost also, which different surveyor, some of which I have sold, and cannot, I fear, make a proper right to, and it may cost much of my small fortune to make good.

The sensitive Boone was at first surprised, then hurt, then bitter. He gave up official life, withdrew more and more from the world. It is no wonder he was angry. As a member of the legislature he had always been going back and forth between the frontier and the settlements. On these trips he was always being importuned to make land entries for other people. Now the good natured help he had given his neighbors turned out to be a constant source of trouble. Whenever there was a dispute over a land entry - and there always was dispute over a land entry - he was blamed.