COAT OF ARMS
among the YANCEY family
Back to Home Page

Before going into any sort of in-depth analysis concerning the Yancey Coat of Arms one must keep in mind the following items:

1) The surname YANCEY is native to America - I do not mean that the Yanceys were Native Americans. I mean that the name appears to have originated in America (or upon arrival in America - or shortly before or after). The Yancey name does not appear to exist in the records of Europe where heraldry was used - or any other country for that matter.

2) Because the Yancey name is native to America - the Yancey Coat of Arms is not listed in any heraldic registers such as "Burkes" or "Reitstap's" or others.

3) Yancey family tradition and legend has it that the Yanceys descend from the Nanney family of Wales. Although this theory lacks any proof - the Nanneys were a Welsh family of Royal lineage who did indeed bear arms and are registered on the heraldic records - their coat of arms being very much like versions of the coat of arms circulated among the Yancey family.

4) In Europe the right to bear arms was granted by the crown to a specific individual. It was not granted to all who had a particular surname. The right to bear heraldic arms was passed on from the original bearer to his descendants. Usually those children other than the first son were required to make differentiation in the arms and only the first born son was allowed to inherit the use of the original coat of arms.

Having said the above, we now discuss the history of coat of arms among the YANCEY family (Not the NANNEY coat of arms) - although the two are possibly related.

The very first mention of any coat of arms in the Yancey family is a letter written in 1805 by one Samuel Shepard to his brother Robert Shepard of Buckingham County Virginia. The Shepards' mother was a Yancey - and the Shepard family seems to have inherited a Coat of Arms that had been passed on from generation to generation (possibly from the original Yancey immigrants down to their generation). The letter also makes mention of the supposed connection between the Yanceys and the Nanneys of Wales - and implies that the coat of arms was actually a version of the Nanney arms. This is one of the few bits of circumstantial evidence that supports the theory that the Yanceys descend from the Nanneys of Wales. 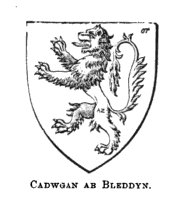 Mrs. Tempe H. Carraway, an early Yancey family genealogist was able to locate this same Yancey Coat of Arms among descendants of the Shepard family about 1928 (as recorded in "Descendants of Jackson M Yancey" By Garrison - page 39). Mrs. Carraway was the author of "The Nanney-Yancey Family" one of the first genealogical reports printed concerning the history and origin of the family. She was also an artist, and it seems that one of her hobbies was painting heraldic material such as arms etc. She made copies of the Yancey arms that she had found handed down through the Shepard family. Her representations of the coat of arms - show a azure (blue) lion rampant (standing facing left paws forward) on a gold shield on top of which is a silver helmet. The motto reads "Ne Touchez pas le Chat San Avoir Le Gant - Touch not the Cat Without the Glove". I have copies of much of her research notes and correspondence about this time period (1920-30) as well as a sketch of the arms. It was her sketches and paintings that were later used as "originals" to later renditions of the Yancey coat of arms. Specifically, the Yancey Coat of Arms (in full color) that was included in the "Genealogy of Yancey Medearis & Related Lines" By Norwood published in 1958. It would seem that copies of this same version of the arms may also have been distributed by one Bertha Y. Jensen - an early Yancey researcher about the same date. Copies of this same version of the arms were also included in such books as "Jameson & O'Callagan Ancestors" by Jamieson and others.

Besides the coat of arms that was passed down in the Shepard Family, there also seems to have been a coat of arms passed down through a Yancey family of Oxford, North Carolina. In his book "Descendants of Jackson M. Yancey" Loyd R Garrison says the following:

"As to the Yancey arms, [I have] seen in the possession of Mr. & Mrs. W. Thornton Yancey, of Oxford, North Carolina, a very old wooden shield painted with the azure lion rampant on a field of gold, which they obtained years ago from a Yancey family that had had it for many years. The motto "Ne Touchez pas le Chat San Avoir Le Gant" was there too."

When Lloyd R. Garrison, published his book in 1962 he included a full color rendition of the Nanney/Yancey arms. His rendition, however, seems to be an artist's rendition based on the description of the Nanney Coat of Arms ( but with the Yancey Motto - Touch Not ....) This version is somewhat different than the "Carraway" version - but seems to be due to the liberties taken by the artist - and not created from any actual family heirloom.

In 1977 Rebecca Yancey, published with her book "Ancestors & Descendants of Capt William Layton Yancey" a rendition of the Yancey Coat of Arms. This version is different than most versions of the arms and includes the motto "In Domino Confido". I talked to Rebecca Yancey a few years before she passed away in 1992. She implied that the artist had taken many liberties in representing the arms and that it wasn't painted from an actual family shield but from some very basic descriptions of the Nanney coat of Arms - the validity of the motto seems very questionable.

During the 1980's up until recent times - various companies such as Halberts in Bath, Ohio have made offers through the mail to provide copies of a "Yancey" Coat of Arms. I have copies of what they were sending out to those who requested. There seems to be NO connection whatsoever between the Coat Of Arms they sent out and the Yancey family. (which looks NOTHING like the arms that has been passed down in the family). In pressuring them into validating their claim as to the Yancey coat of arms - they admitted that the arms that they were distributing for the Yancey family - was actually an arms granted to a family line by the name of YACENOU. The name seems to have died out - but by any means - there definitely seems to be NO connection whatsoever.

I must try to be clear, in saying that technically in the heraldic/legal sense of the term we (Yanceys in America) do not have the right to bear heraldic arms. One, we have no proof that any arms were ever granted to anyone in the Yancey family - although their is proof for the Nanney Coat of Arms among that family in Wales. Two, there is no hard evidence tracing ANY Yancey family back into the Old World. Three, The right to display arms was granted to specific individuals by the crown (and not to families as a whole, per se). The right to coat of arms was passed to descendants - usually the first son, if other sons were granted arms they were usually "differenced" from the father's. Just because there may have been a Yancey Coat of Arms - doesn't mean that all have the right to these arms based on heraldic rules.

But, on the contrary, I want it to be made clear to all those interested, that the common rendition of the Yancey Coat of Arms being circulated among the family today is based on the sketches of Mrs. Carraway. Her sketches being based on actual examples of arms that had been passed down in the family for many generations which had probably been brought to this country by the first Yancey immigrants - from which most all Yanceys in America do descend. The copies of the coat of arms that I, and a few other have distributed among the family, were NOT picked out of a book with total disregard for genealogical relation - nor were they obtained from organizations/companies of questionable repute (such as Halberts in Ohio) - but are based on arms that have been passed down through the family since a very early date.

An interesting web site that shows that English, Welch, French and Latin were commonly used on Welsh Coat of Arms

Sketch of the Yancey Coat of arms by Tempe H. Carraway, probably done about 1930. Most Yanceys coat of arms distributed among the family are based on her sketches - which seem to be the most correct - having been taken from actual shields passed down in the family for various generations This rendition was included in "Genealogy of Yancey Medearis and Related Lines" By Norwood,1958. and "Jamieson and O'Callagan Ancestors" by Jean Jamieson, 1978. These arms were based on the sketches of Tempe Carraway in the early 1900's.

Another rendition of the Yancey Coat of Arms

This is the Coat Of Arms included in "Descendants of Jackson M. Yancey" By LLoyd R. Garrison. The artist who authored this coat of arms - probably did not sketch it from on actual family shield - but designed it from descriptions of both the Yancey and Nanney arms. Their is no evidence that the Nanney Coat of Arms ever had the motto as shown here. The artist seems to have taken various liberties in sketching this coat of arms which were not based on actual coat of arms in the family.

Sketch of the Yancey Coat of Arms included in "Ancestors and Descendants of William Layton Yancey" by Rebecca L. Yancey, 1977. It would seem that the person who sketched this coat of arms took many liberties and it would seem that the motto, as well as a few other items were the creation of someone's imagination and not based on actual family heraldry.

Another rendition of the Yancey Coat of Arms 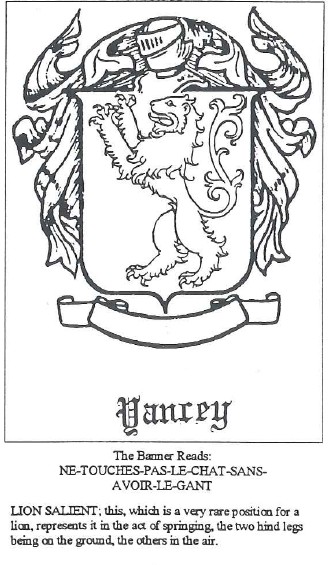 Another rendition of the Yancey Coat of Arms of very questionable origin. 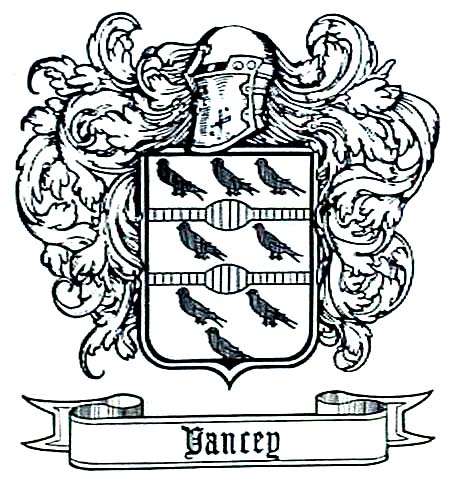 Yancey Coat of arms as printed in publications offered through a mail-order company called "Halberts". It would seem that this coat of arms belongs to a family by the name of Yacenou. There is NO evidence whatsoever that the Yanceys ever bore this coat of arms or that the Yacenou and Yancey families are in any way related.